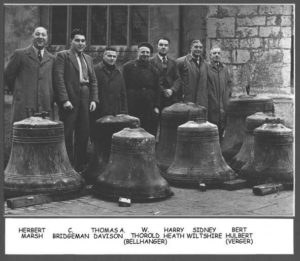 Particularly prominent amongst the many ringers throughout the last century are Sidney Wiltshire, a ringer at St. Andrew’s for 50 years (1903–1953), and Harry Heath, who gave his name to a trophy still awarded within the Chippenham Branch to the band making most progress during each year. Both men appear with the bells in the 1950 group photograph below.